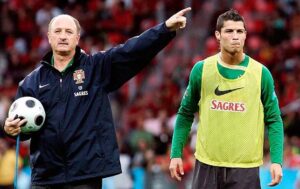 Former Chelsea coach Luiz Felipe Scolari has worked with some of the biggest names in football, with some incredible highs, as well as more difficult moments, such as when he had to deliver the news to Cristiano Ronaldo of his father’s death.

Scolari coached Portugal between 2003 and 2008, reaching the final of Euro 2004, when Portugal hosted the tournament.

Ronaldo’s father passed away in 2005, when the forward was just 20 years old and away on international duty, preparing for a game against Russia.

“It was very hard. It was the moment that created a bond between us, a bond that surpasses the coach-athlete relationship.”

“When the news got to us, before a game against Russia, nobody knew how to tell him and nobody wanted to.

So, I told them I would do it as I knew how it was to lose a parent. I had lost mine a few years before.

“It was very sad, but it’s the kind of moment that connects us as friends.

The next day, Cristiano played a marvellous game and returned to Portugal.

He asked to play. He said, ‘I can’t do anything for my father today, so I’ll play tomorrow and then I’ll go.'”

In an interview which covered much of his career, Scolari also talked about Ronaldo’s commitment and work rate, while also saying he isn’t the most talented player.

“He is the most dedicated of them all. The most talented, he might not be.”

“Talent is not one of the first virtues when we think of Ronaldo, but dedication is what makes him who he is.

“It is the first virtue when I think of him.”