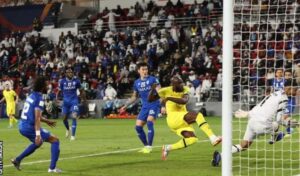 Chelsea will meet Brazilian side Palmeiras in the Club World Cup final after edging past Al-Hilal at the Mohamed bin Zayed Stadium in Abu Dhabi.

Romelu Lukaku scored the only goal in the first half.

The Blues will now look to lift the only trophy that has evaded them across Roman Abramovich’s 19-year ownership of the club.

Boss Thomas Tuchel missed the game as he was isolating after testing positive for Covid-19.

Chelsea dominated from the start against the Saudi Arabian side, and their breakthrough came from Lukaku just after the half-hour mark.

Kai Havertz’s left-wing cross was inadvertently headed into the Belgian’s path by Yasser Al Shahrani, and he rifled home from point-blank range.

It was Lukaku’s ninth goal of the season and ended a six-game drought, after he missed a couple of opportunities earlier in the match.

Two minutes after the break, Havertz burst through on goal and clipped the post from a tight angle, despite having Lukaku and Hakim Ziyech for support in the area.

Chelsea keeper Kepa Arrizabalaga then denied Moussa Marega from eight yards out, while Odion Ighalo and Kanno saw shots blocked as Chelsea struggled to put the game to bed.

But the European champions held on in the end and, in Saturday’s final, will have the chance to avenge defeat in this competition a decade after their last appearance.