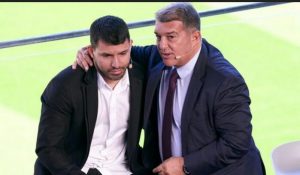 The 33-year-old sobbed while announcing the news on Wednesday, fewer than six months after joining Barcelona.

The former Manchester City striker was taken to hospital on 30 October after experiencing “chest discomfort” during a 1-1 draw with Alaves.

“The decision I have made, I have taken it for my health,” said Aguero.

Manchester City manager Pep Guardiola was among a small crowd watching Aguero make the announcement next to the Nou Camp pitch.

Aguero, who ends his career with 427 goals in 786 games, took time to compose himself after crying at the start of the event and added:

“This conference is to communicate that I have decided to stop playing football. It’s a very difficult moment.

“When they did the first physical test on me in the clinic, the medical staff called me to tell me there was a very big possibility that I wouldn’t be able to keep playing.

From that point I was processing it all but it wasn’t easy. One of the doctors told me straight up, ‘that’s enough’.

“I want to tell everyone that I did everything possible.

I dreamt about playing football since I was five years old and I first touched a ball. I never thought I would get to Europe, so I want to show my gratitude to everyone regardless of where I trained.

“I’m proud of the career I’ve had and am fortunate it is happening to me now rather than before.

I don’t know what awaits me in the next life but I know there are a lot of people who love me and want the best for me.”

Despite an untimely end to his spell at Barcelona, there can be no doubting Aguero’s status as one of the foremost strikers of the 21st Century.

After starting out with Independiente in Argentina he moved to Atletico Madrid, winning the Europa League in 2010 and scoring 101 goals in 234 appearances.

That record attracted the interest of an upwardly mobile Manchester City, who paid a reported £38m to bring him to Etihad Stadium. 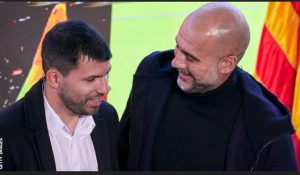 He would go on to become a club and Premier League legend during a 10-year spell in England, winning five Premier League titles, one FA Cup and six League Cups.

“Atletico Madrid took a bet on me at 18 years old, that I could do things well in Europe,”

Aguero said at his news conference. “People at Manchester City, you all know how I feel. They look after me really well.

“When a player plays, they always want to keep winning more things, but I think I can be happy with the titles I won.

Anyone can always do a bit more, but I think I did my best for me and my clubs.”

Aguero left City in the summer having broken their all-time scoring record, with 260 goals in 390 games, including 16 hat-tricks.

The Argentine is also responsible for arguably the Premier League’s most iconic moment, scoring with virtually the last kick of the 2011-12 season to seal a victory over Queens Park Rangers that earned Manchester City a first top-flight title since 1968 and denied fierce rivals Manchester United by virtue of goal difference.