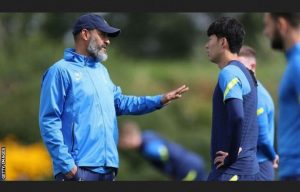 Son Heung-min who missed Spurs’ defeat by Crystal Palace on Saturday, is still recovering from a calf injury sustained while on international duty.

Dier was substituted in the 12th minute after suffering a dead leg during that 3-0 defeat at Selhurst Park.

Nuno says he is unsure whether the pair will be fit for Sunday’s Premier League game against Chelsea.

“I cannot say. They are improving, day by day they are better, but alongside the South American players, we still have to assess,”

“[Steven] Bergwijn is better, he travelled with us, he trained yesterday and today, he is much better.”

Argentina’s Giovani lo Celso, Cristian Romero and Colombia’s Davinson Sanchez are training in Croatia and expected back at the club on Saturday.