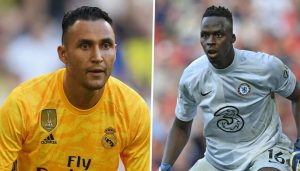 Mendy  clean sheet record was close to the feat achieved by the Costa Rican during his spell at Real Madrid.

The Senegal international put up an incredible performance on Tuesday night.

As the Blues recorded a 1-0 win over FC Zenit Saint Petersburg at Stamford Bridge.

The game looking destined for a goalless draw, before Romelu Lukaku scored the decisive goal in the 69th minute thanks to an assist from Cesar Azpilicueta.

Mendy – ably protected by Azpilicueta, Andreas Christensen and Antonio Ruediger – rose to the handful of testing opportunities created by the Blue-White-Sky Blues.

As former Rennes keeper  prevented the Russian Premier League side from finding the net in England,

the African star earned his 10th shutout in his 13th appearance.

Only Costa Rica international Keylor Navas has attained that mark in fewer games (11) during his spell at Spanish elite division side Real Madrid.

As Chelsea sought to find stability between the sticks as costly blunders had crept into Kepa Arrizabalaga’s game.