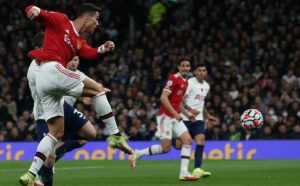 Cristiano Ronaldo was the inspiration behind an excellent United display which provided the perfect response to last week’s 5-0 thrashing at Old Trafford that raised questions over Solskjaer’s future.

The Norwegian manager is not out of the woods yet but Ronaldo made life much more comfortable for his boss with a sublime far-post volley from BrunoFernandes’ cross six minutes before the break followed by a slide-rule pass to set up Edinson Cavani for a second after 64 minutes.

In contrast, Spurs were mediocre with HarryKane barely in the game and unrest among their fans, who turned on manager Nuno when he replaced Lucas Moura with StevenBergwijn in the second half.

Marcus Rashford wrapped things up with a cool finish four minutes from time as Spurs fans erupted in fury against Nuno and their chairman, with chants of “We want Levy out” echoing around the vast stadium.