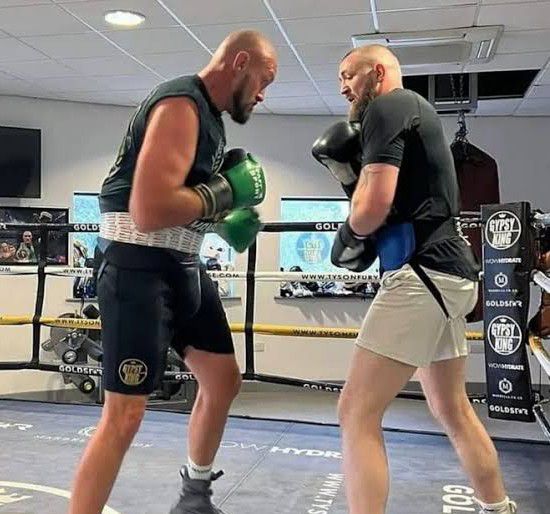 Tyson Fury has mocked both Anthony Joshua and Oleksandr Usyk but has also revealed that his ‘deadline’ for AJ to sign to fight him has been extended.

The Gypsy King had set Monday as a deadline for Joshua to sign to fight him on 3 December, despite all promoters involved saying that negotiations were progressing well but still ongoing.

With Monday coming and going it appeared that the fight was off, but now Fury has revealed that he was persuaded by Frank Warren to extend his self-imposed ‘deadline’ on discussions.

It now seems that Fury wants contracts signed by the end of Thursday, keeping hopes of the all-British bout alive, but whether that is now a head deadline or not is yet to be seen.

‘Right, Anthony Joshua, where do we start? The deadline was Monday, Frank Warren convinced me to let it carry on for another couple of days.

‘Today is Thursday, and even though I knew you wouldn’t sign this contract I allowed Frank to continue doing meetings with your team, your broadcasters and all that.

‘Now we have BT, DAZN and ESPN all on the same page.

They are happy with everything, ready to rock n roll.

‘You guys asked for a lot of stuff. You wanted to be co-promoters when you’re a voluntary challenger. I said, give it to them.

‘You wanted full transparency, even though you’re not an equal shareholder in this party.

I said, give them full transparency, I’ve got nothing to hide, I’m not trying to rob anybody.

‘Everything is clean and fair. Now Joshua the ball is really in your court, son.

‘If you’re a man and you’ve got any sort of dignity and pride about you, you’ll get this contract signed today.

‘This is it. There is not more days, weeks, months.

You’ve had the contract for over two weeks and you still haven’t signed it.

‘Show the public that you’re really the big coward that I know that you are and don’t sign it.

I don’t care either way. It makes no difference to me at all. You’re a beaten man and I’m a world champion, I’m chucking you a massive bone.

‘But I know I can punch your face in so I’m willing to give you an opportunity.

‘There’s nothing more to do, everyone is happy, get your team onto mine, they’ll be available all day. Get this contract signed today, you big p***y.

‘Let the British fans have what they want. There’s no more running, you have to fight me, you cannot escape, the Fury is coming, b***h!’

This speech came after he mocked Joshua by responding to a report that WBA, IBF, WBO and IBO heavyweight champion Usyk would help AJ train for a fight with Fury after the Ukrainian beat the Brit twice.

‘Maybe you can lend him your nuts middleweight?!’ Fury tweeted. ‘@usykaa don’t be a 🐱 like your big pal!’