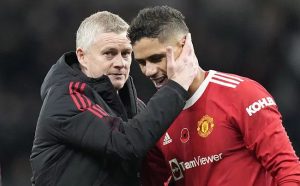 Former Real Madrid defender Raphael Varane picked up a hamstring injury in the midweek win at Atalanta and will be sidelined for around one month, as has been officially announced by the club.

The French centre-back has featured in just nine games in all competitions so far this season.

As his previous injury sidelined him for around three weeks.

After missing out on the 5-0 humiliation against Liverpool.

Varane will not be at Ole Gunnar Solskjaer‘s disposal for another derby, this time against Manchester City at Old Trafford on Saturday.

After the 5-0 thrashing at the hands of Liverpool,

Solskjaer decided to shift from his preferred 4-2-3-1 formation to a 3-5-2 and fielded Varane alongside Victor Lindelof and Harry Maguire against Spurs.

Taking advantage of Tottenham’s struggles in attack this season.

Manchester United managed to keep a clean sheet and grab a morale-boosting 3-0 win on the road.

The Norwegian coach tried out the new system away at Atalanta too,

but United struggled against the Serie A side, who would have grabbed all three points in Italy had it not been for Cristiano Ronaldo‘s stoppage-time equaliser.

Read Also: It Can Be Good For The Fans To Wake The Players Up With Whistles. Says Ancelotti

Alternatives in defence for the derby

Varane will be sidelined for the Manchester derby and it remains to be seen.

Whether Solskjaer will decide to shift back to his favoured 4-2-3-1 or opt for the back three again.

Maguire can play alongside Lindelof in a back four, yet the latter has suffered a knock which sidelined him against Atalanta and he is doubtful for the derby.

Should the Swedish centre-back make it in time,

United could play a back three featuring Lindelof, Maguire and Eric Bailly, who was in the starting line-up against Atalanta and impressed on Tuesday night.

It remains to be seen how Solskjaer will try to cancel out Manchester City‘s attack, which is averaging two goals per game so far this season in the Premier League.