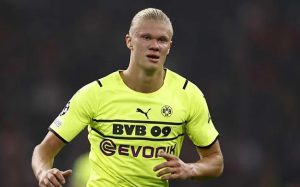 The Borussia Dortmund star Erling Haaland has become one of the most coveted strikers in Europe.

His departure to another club, however, could cost potential suitors up to 300 million euros.

“The full package with five-year salary and commission for the agent will probably be on the border of 250 to 300 million euros.”

Struth believes that Haaland will depart Dortmund next summer.

However, he ruled out a move to Bayern Munich and explained why he is certain that the Bavarians will not be Haaland‘s next club.

Read Also: Varane’s Injury Causes Headache For Solskjaer: What Are His Plans B To Stop Manchester City?

“Even if Bayern Munich had the money, they wouldn’t [sign Haaland].”

“All hell would break loose if a player in Germany earned 50 million euros.”

Struth also stressed that Haaland‘s decision will not be based on salary demands.

But rather sporting criteria and his personal impression.