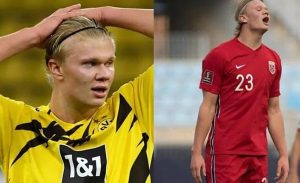 Erling Haaland is one of the hottest properties in European football at the moment, and Real Madrid are just one of the clubs in interested in the 21-year-old.

Next summer’s transfer window is likely to see Haaland be a prominent figure, and the Norwegian might have to make a decision about his future that will have current club Borussia Dortmund sweating.

In just one week, Haaland, who has been out for a month with a hip injury and likely won’t return until 2022, saw Norway fail to qualify for the 2022 World Cup in Qatar and then watched his Dortmund side fail to progress beyond their Champions League group, losing 3-1 to Sporting CP as they dropped into the Europa League.

Without being from a traditionally big football nation, Haaland has already missed out on the European Championship.

This last week of disappointments could lead the player to consider his options for next summer, as he may seek a club who can guarantee his involvement in the latter stages of the Champions League.

Real Madrid and Manchester United on the prowl

A number of European giants will want Haaland, especially with his release clause set at 75 million euros from next summer.

But any deal will not be easy, as Mino Raiola is his agent.

The Bundesliga side don’t want to lose Haaland, although they will likely have to accept their fate.

They are currently considering offering him a new contract, going from nine million euros a year to 16-18 million euros, but keeping his 75 million euro release clause in place.