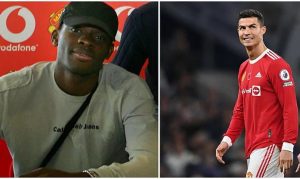 Louis  Saha Has praised the qualities of his former teammate Cristiano Ronaldo and stressed that Manchester United coach Ole Gunnar Solskjaer is lucky to have him back at Old Trafford.

The former Red Devils striker, who plied his trade at United between 2004 and 2008,

believes that the issue of any teammates not being fond of Ronaldo is that they can’t match the Portuguese star’s work rate and dedication.

“Solskjaer has to be very happy with [Ronaldo‘s] return, because he is an alien.”

“He can play in any team or league in the world and he will always score goals.

He has a dedication and a capacity for sacrifice that nobody else has.

“Also, if there is a player with worldwide influence, that’s Cristiano Ronaldo.

I’m not speaking only about football. Also on a social level.

Many people are aware of what he does. He is a role model and an inspiration.

“My relationship with him was simple because we were both hard working.

If you don’t like Cristiano as a teammate, it’s because you’re not a hard worker. It’s that simple.

“Besides, he was a guy who always had a smile for you.

He was intimate and respectful. On the other hand, sometimes I had the feeling that it was impossible to defend him.

“I would love to play with him again. Even though it’s the 90th minute you feel like he can still score a goal, and if he has to score five in a game that’s what he does.”

Saha also said that Karim Benzema could win the Ballon d’Or this year, despite seeing Mohamed Salah as the likely candidate to take home the award.