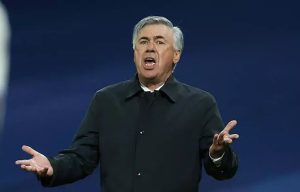 Real Madrid coach Carlo Ancelotti defend  fans as he had no complaints about the whistles the Bernabeu crowd had for his players’ lacklustre performance in the 2-1 victory over Shakhtar Donetsk.

While preferring to focus on the positives and the three points, the Italian recognised his team need to be better.

The fans played their part in that sense, but certainly key to getting the three points were Thibaut Courtois, Vinicius and Karim Benzema.

“I understand the whistles because I know the atmosphere.”

“It’s a demanding stadium. We started both halves well and then dropped off. We weren’t aggressive enough.

“That can happen and it’s good that the fans wake us up with a few whistles.”

“It’s true that they stood out more than others,”

“It’s a team that is trying everything. [David] Alaba and [Eder] Militao also played well.

The head coach was certainly content enough with the performance.

Making just two substitutions and neither for tactical reasons, which puzzled many observers.

“We started both halves well, but we weren’t aggressive.”

“We had control without trying to hurt the opposition and that’s what I told the players.

“I made the changes for physical reasons, but I didn’t want to tinker with anything else.”

His unwillingness to change things, even though the team were far from firing on all cylinders.

Meant that there were no minutes for Marco Asensio and Eden Hazard, who cut frustrated figures on the bench.

“Getting angry is normal and I understand it, I understand very well how it is when a player doesn’t play or warms up but doesn’t come on,”

“I told the players who didn’t get on that and I’m sorry.

“Marcelo was warming up for 40 minutes. He has four Champions League winners’ medals and is an important player, but I didn’t bring him on because I saw the game didn’t call for it.

“It’s part of a coach’s job and it’s a bit ugly that side of things.”