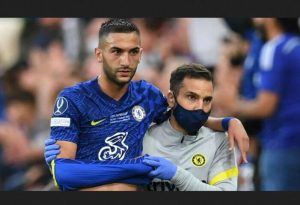 Chelsea goalscorer Hakim Ziyech was forced off with a shoulder injury in the first half of Wednesday’s UEFA Super Cup against Villarreal.

Ziyech gave the Blues the lead in the 27th minute, converting a cross from Kai Havertz from close range.

Just minutes later, the Moroccan star had to be taken off after a painful-looking incident during a Villarreal corner kick.

Just as the first half was drawing to a close, Ziyech appeared to be in a great deal of pain after an awkward landing while defending a corner kick.

Ziyech was holding his shoulder and had to be replaced by Christian Pulisic in the 43rd minute.

The Morocco star was later seen on the Chelsea bench with a sling on his arm.

Ziyech has been in outstanding form for Chelsea during pre-season and looked to be a candidate to start Saturday’s Premier League opener against Crystal Palace..