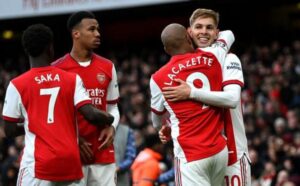 Second-half strikes from Emile Smith Rowe and Bukayo Saka lifted Arsenal to victory over Brentford as the Gunners moved to within a point of the top four.

England international Smith Rowe ran at the Brentford defence and curled a measured right-footed shot past David Raya to send his side on their way to a second successive win.

His goal came following a first half in which Arsenal had two penalty appeals turned down.

Bukayo Saka capped a satisfying afternoon for Mikel Arteta’s side when he slotted home, although Brentford felt they should have had a free-kick for a foul on Pontus Jansson in the build-up.

Brentford were superb when they beat Arsenal on the opening night of the season and, while Christian Norgaard struck an injury-time consolation, the Bees’ winless run extended to seven games.

Victory moves Arsenal level on points with fifth-placed West Ham, who drew at Newcastle earlier on Saturday, and within a point of Manchester United in fourth with two games in hand on the Red Devils.