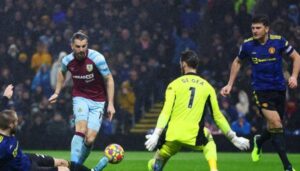 For the second game running, United dominated the play and had most of the chances, with Paul Pogba putting them ahead with his first goal of the season.

But just as against Middlesbrough in the FA Cup, the visitors were made to pay for their profligacy.

On this occasion, they had two first-half goals disallowed, while Nick Pope made excellent saves to deny Marcus Rashford, Edinson Cavani and Raphael Varane.

In contrast, Burnley made the most of their brief spell in the ascendency at the start of the second period,

It means United drop to fifth, with the three teams below them all capable of catching them if they win their games in hand.

Burnley are four points from safety, but are three unbeaten, even if their run without a win now extends to 10 matches.