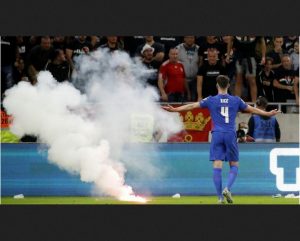 Fifa steps in on racial abuse aimed at England players during Thursday’s 4-0 win,

over Hungary in a World Cup qualifier in Budapest.

Raheem Sterling and Jude Bellingham were both targeted.

after fans’ discriminatory behaviour, fans were allowed in on Thursday as the game came under Fifa’s jurisdiction.

The Uefa ban relates to racism and other discriminatory conduct which took place during Euro 2020 in June.

Fifa are able to take action because it is their competition.

The game’s global governing body is yet to receive reports from match officials,

and delegates who were at the game, which was marred by a number of incidents.

England’s players were booed as they took a knee before the match to protest against racism,

BBC Radio 5 Live reporter Juliette Ferrington describing the reaction from fans as a “wall of noise”.

She also described how racist chants could be heard during the match and that Sterling and Bellingham were the targets of abuse.

In the second half, Sterling was pelted with paper cups and bottles when he opened the scoring for England.

A flare was later thrown on to the pitch after Harry Maguire put the visitors 3-0 ahead.

England manager Gareth Southgate had ice thrown at him by fans during his post-match interview with BBC Radio 5 Live,

in which he said he hoped the abuse was “dealt with the right way”.

“I’ve heard reports of racism, which I hadn’t heard during the game,” he said.

“Everyone knows what we stand for as a team, and that’s completely unacceptable.

It has been reported.

Our head of security has spoken to the players and taken their statement. We will deal with it in the right channels.

“The world is modernising and although some people are stuck in their ways of thinking and their prejudices,

they’re going to be the dinosaurs in the end because the world is changing.”