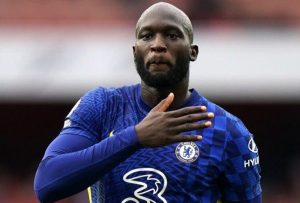 Romelu Lukaku has established a reputation for speaking his mind in interviews and not giving a solitary eff about the consequences.

In the biggest footballing story of 2022 so far, Romelu Lukaku was dropped from Chelsea’s matchday squad to face Liverpool after an explosive chat with Sky Italia.

Revealing he was unhappy at Chelsea and wished for a return to Inter Milan in the future.

“Obviously, stuff is changing and stuff is happening but there were some players that we could have got, that I knew the club could have got, and they didn’t get,” Lukaku said at a Kick It Out event while at Everton.

“And they are playing in this league. I am not saying names but they are doing well.

“Everton as a football club has a great history. But the future has to be written.

You get me? Because we always talk about the teams of the 80s and 70s, and if you look it was great.

“That is what the fans want. So instead of living in the past, you have to think ahead.

Everton manager Ronald Koeman took a dim view of the interview and it was apparent that Lukaku felt Everton weren’t ambitious enough for him.

“For the time being, England is the best for me,” Lukaku said at a press conference on international duty when questioned about his Everton future.

“My attorney is now talking to a club. I know where I want to go.

I just stay patient. I know that appointments have been made. I’m just waiting for a call.

“I’m now six years in the Premier League, I know the competition inside out.

I’m almost 100 goals in the league, which is a milestone I want to achieve. The Premier League is a dream for me.

“I want to win the Premier League as often as possible.

But I also want the Champions League, the FA Cup and all the other prizes.

“Staying at Everton is not really an option, I think.”

And so it proved. Within weeks, Lukaku had completed a £75million move to Manchester United and Everton have struggled to replace him.

And let’s not talk about how they reinvested that cash.

him. And let’s not talk about how they reinvested that cash.

Asked if he would ever consider a future switch to Italy, the forward said:

“Why not? I hope it happens.” He’d been at Manchester United for just over a year and already Lukaku had his eye on the exit door.

“I think it’s disrespectful at times if you start mentioning other clubs when you’re actually contracted to the club you’re at,” United legend Gary Pallister said in response.

This interview was conducted with the boxing gloves removed – Lukaku was on the verge of a move to Internazionale and spoke out against his perceived treatment at Old Trafford.

An avid NBA fan, Lukaku made an appearance on the LightHarted Podcast, run by New Orleans Pelicans player Josh Hart and it was his comments about United that made the headlines.

“A lot of people are playing bad (at Manchester United) but they have to find a culprit so if they want to put the blame on me, f*ck it, do what you got to do,” Lukaku said.

“I’m here and playing, but at one point I will go. I’ll do something else.

For me it was just sh*t. The team has so much potential to do great stuff.

A lot of talent, but it’s not only talent, it’s about building a team.

“A lot of people don’t think I can be part of that team. For me, I’m just saying, if it’s like that, then we can go our separate ways.”

He went on to say: “A lot of stuff has been said where I didn’t feel protected.

“I felt like a lot of rumours, ‘Rom going there’, ‘they don’t want Rom’, and nobody came out to shut it down.

It was for a good three, four weeks. I’m waiting for someone to come out and shut it down. It didn’t happen.

“I had my conversation, told them it was better to go our separate ways.

If you don’t want to protect somebody, all these rumours come out.

“I just wanted you to say ‘Rom is going to fight for his place’, but it never happened for four, five months.”

In a YouTube interview with Ian Wright seven months after leaving United.

“One bad year can happen to everybody in their career. It was just done for me.

You know what happened behind the scenes, it was just done. For me, it was done.

“It was a difficult situation where for myself I had to make a decision where I have to go somewhere where I can learn other aspects of my game and work with somebody that wanted me as well.

“Ole wanted me to stay, but I told him I was over. I didn’t have the energy.”