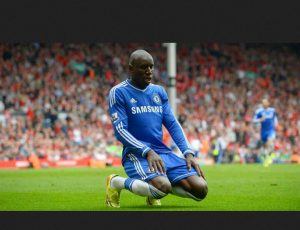 The Senegal front man put an end to his 16-year football career on Monday after he left Swiss club Lugano in August.

Ba took to social media on Monday to make his decision public.

He joined Lugano on a free transfer in June and he only played 47 minutes of league football.

He terminated his contract, reportedly because of a change of ownership.

And, he enjoyed a nomadic playing career across Belgium, Germany, England, Turkey, China and Switzerland.

During his club career, the 36-year-old won the Uefa Europa League with Chelsea in the 2012-13 season.

On the international stage, he played for Senegal between 2007 and 2015 with four goals to his name in 22 matches.

“It is with a heart filled with gratefulness that I announce the end of my playing career.

What a wonderful journey it has been,”

“Beside all the sweat and tears I have faced, football has given me so many beautiful emotions.

“From the passion of the fans and the noise coming from the stands after every goal.

To the connection with my teammates on and off the field.

This will forever remain in my head and heart.

“I want to thank everyone I’ve crossed paths with and helped me grow.

Every club and manager for given me an opportunity, the fans for their tremendous support,

and my family and friends for unconditional love.

“From the bottom of my heart, thank you. Praise be to the almighty.”

Ba’s longest playing stint was at Hoffenheim where he scored 37 goals in 97 Bundesliga matches.

He later switching to England to join West Ham United in January 2011.

But, he left the Hammers six months later following their relegation to the Championship.

Newcastle United moved for him instantly and he made himself a key player at the club,

with his goalscoring abilities as he grabbed 29 goals in 54 Premier League games within one-and-a-half seasons.

In January 2013, Ba joined Roberto Di Matteo’s Chelsea where he scored 14 goals before switching to Besiktas in June 2014.