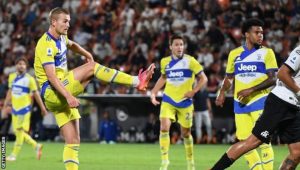 Allegri side fightback to earn their first Serie A victory of the season against Spezia.

Spezia had produced their own comeback from a goal down through,

Victory moves Massimiliano Allegri’s side up to 12th in the table.

Having failed to win any of their first four games for only the fourth time in the club’s history.

Kean’s first Juventus goal since rejoining from Everton in August temporarily relieved some of the pressure on the visitors.

But Gyasi levelled with a looping strike five minutes later.

Read Also: ‘ I Am Happy In This Incredible City And Team’ Hakimi Expressed His Excitement At Psg

And, after a couple of good saves by goalkeeper Jeroen Zoet from Paolo Dybala at the end of the first half.

Chiesa, rewarded for his persistence as the ball broke kindly for his goal, led the Juventus fightback.

De Ligt stabbed home with 18 minutes remaining before a nervous-looking Juventus held on for a valuable first three points of the campaign.