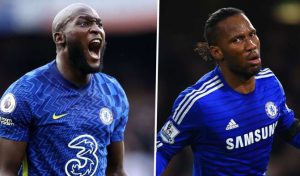 The Belgian has made a superb start to life back in west London following his £98 million ($136m) transfer from Inter.

Lukaku has strike  three goals in three appearances so far.

Including two in Saturday’s win over Aston Villa, and on Tuesday night will make his,

first Champions League appearance for the Blues as they take on Zenit St Petersburg.

“For sure, they are similar,”.

“It’s not just what he brings on the pitch, either.

I think Lukaku has learned a lot from Didier in terms of his presence off the pitch.

By all accounts he is a bit of a leader in the dressing room and that’s Didier.

“Didier was a born leader, a real man’s man.

Everyone loved him. We talk about [John] Terry and [Frank] Lampard being leaders in that dressing room.

But, Drogba was every bit as much a leader as them.

“Lukaku is of that ilk. He’s got a little way to go before he can be put in that bracket, for me, but he’s certainly got the ability to get there.

“And he’s got a great mindset, a bit of fire in his belly because he wants to prove himself at Chelsea the second time around.”

“His movement is good. He’s come back as the complete package. I’d love to have played with him, I can tell you!”

Chelsea begin their Champions League defence this evening, when they take on Russian champions Zenit at Stamford Bridge.