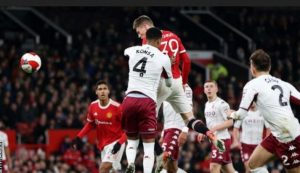 McTominay was allowed to run unchallenged to the edge of the Villa six-yard box, where he met Fred‘s perfectly weighted cross to steer the ball past Emiliano Martinez.

The goal condemned Villa boss Steven Gerrard to an unhappy return to Manchester, where he was baited by the home supporters because of his allegiance to Liverpool.

However, the result was incredibly harsh on Gerrard and his team.

Twice in a matter of minutes early in the second period they had the ball in the United net, only for both to be ruled out.

The second was a straightforward offside goal against Danny Ings, albeit the flag was not raised until after Ollie Watkins had put the ball in the net.

However, the first was far more debatable and involved a lengthy wait for VAR to ask referee Michael Oliver to make final decision by consulting the screen and eventually ruling Jacob Ramsey was offside and impeded Edinson Cavani in the build-up.