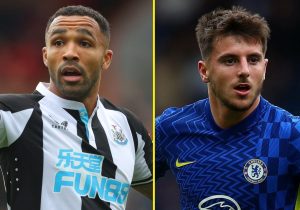 Newcastle face a tough task in grabbing their first win of the season when they face Premier League leaders Chelsea on Saturday.

The Magpies came from behind to snatch a point in their 1-1 draw at Crystal Palace last weekend in their first game since Steve Bruce left the club.

The Tyneside outfit’s new owners are yet to appoint a replacement meaning interim boss Graeme Jones will once again take charge against the Blues.

Newcastle are just one place ahead of bottom-place Norwich – who were thrashed 7-0 by Thomas Tuchel’s in-form side during Chelsea’s last outing.

The Premier League clash will take place on Saturday, October 30.

The match at St James Park Park will kick off at 3pm.

Newcastle have only won one of their of their last six Premier League meetings against Chelsea, losing the other five, with their sole triumph a 1-0 victory in January 2020.

Jonjo Shelvey is available once again for the hosts after serving his one-game ban for the red card he was given in the 3-2 defeat against Tottenham.

Yet Joe Willock remains a doubt following the reveal that the ex-Arsenal midfielder has been battling a toe injury since September.

Martin Dubravka and Paul Dummett also face late fitness checks to assess whether either of them could return for interim boss Jones.

Chelsea meanwhile have a number of concerns, with Mateo Kovacic suffering a hamstring injury during training and will be sidelined for weeks.

Forwards Romelu Lukaku and Timo Werner will both miss out once more while Christian Pulisic is still not ready to make his return from injury either.

But there is more positive news on N’Golo Kante who is set to be back in the matchday squad after he was rested for the Carabao Cup in midweek.

“Atmosphere in the stadium for them, the experience right now has huge value to play against us. We cannot fixate on being so-called favourites.

“I like how we have approached these matches, the effort we have put in, exactly what we want from our team.

“We know very well that you can turn things around and close gaps in 90 minutes.

“Newcastle will try to put up their best performance but we are responsible for us, to set new standards and meet what we demand. We expect a tough game.”