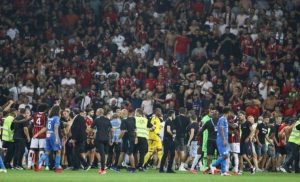 Nice Punished with their next home fixture against Bordeaux to be play behind closed doors,

after Sunday’s match against Marseille was abandoned.

Marseille physio Pablo Fernandez has also been suspended for his actions.

Marseille’s Dimitri Payet was hit by a bottle as he prepared to take a corner and threw it back into the crowd before Nice fans stormed the pitch.

Chaos ensued as stewards and players struggled to restrain fans,

with the players eventually leaving the field.

Players from Nice, who led 1-0 at the time, came back out to finish the game but Marseille’s players refused to.

Both clubs were summoned to a disciplinary hearing on Wednesday with Ligue de Football Professionnel (LFP), the French league’s governing body.

The LFP has opened an investigation into the behaviour of the Nice fans,

the actions of the players on the pitch and what happens to the result of the game.

Until then, the game will not count in Ligue 1 standings.

The disciplinary committee will release the findings of the investigation on 8 September and determine what decisions will be made.