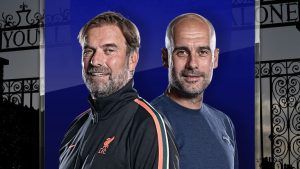 Paul Parker is back with his Premier League predictions for the weekend.

Manchester United take on in-form Everton at Saturday lunchtime while Arsenal travel to the south coast to take on Brighton in the evening.

To lose three domestic games at home for United would be a real rarity.

They are playing Everton who points-wise are having a decent season.

But if you saw them play you’d look at Rafael Benitez and say he’s carried them through tactically by how he gets them to defend.

This is going to be a hard game for United because Everton will sit deep.

They’re not the quickest team and are quite slow in the way they attack.

They don’t have many quick players, they play and will be looking to counter-attack.
United to win this game.

Brighton were not at their best against Crystal Palace.

It’s a derby game without any great value, but there is always that feeling that with their cohesion they had an idea of what they wanted to do.

When they’re at home against Arsenal… three weeks ago I would have been 100 per cent that this was going in one direction.

But after Arsenal’s recent performances I’m going for an away win.

Does Ben White get a bit emotional when they meet?

Brighton know how to play against him so it will be interesting.

Read Also: Pep Guardiola Reveals How Liverpool Coach Jurgen Klopp Has Made Him A ‘Better Manager’

I think Villa will win and make it three away wins in a row.

Their midfield is more energetic than Tottenham’s. Tottenham ponder.

They are relying so much on Heung-min Son and Lucas Moura as well.

Dele Alli and Harry Kane are showing no energy at all.

If Kane scores everything is forgotten but that’s all they’re hoping for at the moment.

The rest of their midfield and defence hasn’t really been good since Mauricio Pochettino left.

I just can’t see Tottenham winning it. If they do win it will have to be a smash and grab like it was against Wolves and Manchester City.

Manchester City to win. Liverpool worked on their defence against Liverpool thanks to the luck that Trent Alexander-Arnold was injured.

James Milner went there and defended properly which was the difference in their backline.

City will feel hard done by and will have felt they should have got something from the Paris Saint-Germain game.

It took an unbelievable goal from Lionel Messi to kill the game off.

It was always in doubt whether PSG would walk away with all three points.

City will come back highly tuned. I think Jesus will start.

He won’t start Sterling up front against Liverpool.

Pep Guardiola will want someone more cunning and clever to go up against Virgil van Dijk.