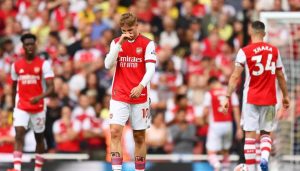 Paul Parker says Arsenal need to dig deep and show passion and discipline to win against feisty Burnley on Saturday, which is arguably a rarity.

Meanwhile Crystal Palace, who showed their strength against Tottenham with 3-0 win last week,

might have their spirits dampened by Liverpool at Anfield. And what’s the worst thing Ole Gunnar Solskjaer can do as Manchester United travel to West Ham?

Parker, the former United and England defender makes his predictions for this weekend’s Premier League action.

Oh… why did you pick that game? Burnley went to Everton and dominated them.

They could have been in control of the game but they came out in the second half and all of a sudden,things turned around.

Let’s not go on about Arsenal too much because everything has already been said… I’m going for a draw.

For Arsenal to win it that would be incredible because they would have to dig deep and show passion and discipline which would be a rarity this season so far.

That’s a home win, even though Palace played great last weekend – they were fantastic against Spurs.

City scored six goals, conceded three, could’ve conceded five or six, they were all over the place.

Not very well disciplined and some players not doing their jobs…

Worst thing that can happen out of that is Ole Gunnar Solskjaer decides to bring Jesse Lingard on the pitch.

He’s got to stop being sentimental because it doesn’t get you anywhere.

but two of their key players were out.
Michail Antonio can’t play which is a God send because,

I think he would have gone against Harry Maguire which would have been interesting with his pace and strength.

West Ham have got Nikola Vlasic who sits a little bit off so defensively,

that could cause issues and they could have two centre halves who aren’t facing up to anyone.

But the quality of players Manchester United have got will probably still win this game.

They controlled the game to a point and they had opportunities.

Chelsea were slightly better than Zenit. Tottenham, however, were woeful against Crystal Palace.

I have done more steps than Dele Ali and Harry Kane put together walking to and from the train station.

It’s Chelsea’s game to lose, given Tottenham in the state they are.