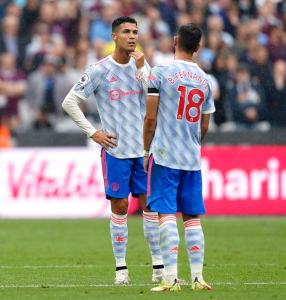 Cristiano Ronaldo has scored five goals in his five appearances since returning to Old Trafford in the summer transfer window.

After Ronaldo’s 95th minute winner was required to beat the La Liga side.

Parker feels United are depend too much on the 36-year-old.

All Manchester United can take from their win over Villarreal is the result.

Because the rest of it was a million miles away.

My worry, which was what I felt when they made the signing, is that,

I hope United are not going to rely on Ronaldo to score goals for them and to be their only goalscorer. It seems like they are.

Bruno Fernandes has not got the same influence as what he had before.

His completion rate is nowhere near what it was in the previous season and a half.

Their reliability on Ronaldo is getting bigger every time they go into big games.

Fernandes doesn’t seem as far forward. It seems only when things are going the right way he suddenly pushes on more.

If you watched that match in its entirety you would have realised that United went to a sale at Primark and came away with Hugo Boss clothing.

That’s how it worked out for them.

If the game stayed as it was they would have been bottom after two games of the group stage.

Which would not have been good for Solskjaer.

But now the jury is out again for United because the performance was absolutely terrible.