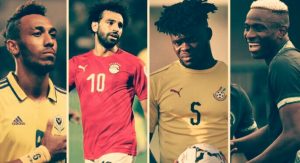 Before Nations cup draw today, below are  the all ranks 24 qualifiers for the Afcon.

Victories in Malabo against Libya and Tanzania ensure Equatorial Guinea will play at the Nations Cup for the first time in a tournament that they’re not hosting.

However, it was their 3-2 victory in Libya last year that really offers some hope that they can do more than just make up the numbers.

Returning to the tournament for the first time in 11 years, they defeated Algeria in the 2010 edition,

They deserve immense credit for eliminating Uganda, but they will face an uphill struggle to escape the group.

They were excellent at Bahir Dar during their qualifying campaign, averaging three goals per game, but failed to take a single point away.

Three consecutive qualifications is a superb achievement for one of the continent’s smaller nations.

They’ve never won a game at the tournament, but after outclassing Congo-Brazzaville 3-0 at home in their final fixture, they can’t be underestimated.

20.ComorosThis year’s Madagascar, the Comoros are the second Indian ocean island nation to make their Afcon debut over the last two tournaments, having enjoyed dramatic progress in recent years.

The away victory in Togo and the home draw with Egypt demonstrated their nous and ability to grind out results, but the 4-0 hammering by the Pharaohs in Cairo this week highlights the work that lies ahead.

19. Sierra LeonThe last team to qualify, the Leone Stars saw off Benin in a replayed gameweek six fixture after the final group game between the two sides had been postponed due to coronavirus shenanigans.

Sierra Leone can pack a punch – look at how they fought back to hold Nigeria 4-4 – but they will have their work cut out to escape from their Nations Cup group.

The second of two first-time qualifiers, Gambia have enjoyed immense progress under the tutelage of Tom Saintfiet, who was rewarded with a new contract in the aftermath of their qualifying campaign.

Encouraging results during the 2019 campaign was a sign of things to come, and qualifying ahead of Gabon and the Democratic Republic of Congo is a remarkable achievement.

The main beneficiaries from Zambia’s latest implosion, Zimbabwe could even afford to be defeated by their near neighbours in their final group game.

The Warriors were a little lightweight—both figuratively and literally—at the last Nations Cup, although their fight back to take a point from Algeria in Harare last year was one of the comebacks of the qualifying campaign.

Certainly, in the likes of Tino Kadewere, Khama Billiat and Knowledge Musona, they have attacking options who can hurt opposition defences.

Like Ethiopia, they’re among the fallen giants of African football, and after taking out South Africa during qualification, they ought not be underestimated.

They largely neutralised Bafana Bafana in Omdurman, took their chances well, and they could cause teams a few troubles in Cameroon.

Physical and organised, with a touch of class up front, Mauritania managed to build on their debut qualification in 2019…unlike the likes of Burundi and Madagascar.

They lost just once during qualification, and will be targeting their first victory at the Nations Cup come 2022.

Overcamea troubled campaign to advance from Group D, going someway to making amends for missing out on the Nations Cup in 2019.

Pierre-Emerick Aubameyang remains a lethal operator, capable of firing the Panthers past any other team on their day, and he’ll be desperate to make the most of a final opportunity to enjoy international glory.

Progressed on the final day of qualifiers after defeating Mozambique 1-0 thanks to an own goal.

The Islanders return to the top table after missing the last two tournaments, but they ended the campaign undefeated, without conceding a single goal away from home.

For context, the only other side not to let in a goal on the road during the campaign was Morocco.

Have improved in recent years, with Naby Keita of Liverpool again proving to be the key man in the heart of the park.

He’s unshackled with the national side, tearing forward to influence proceedings in the final third, and Guinea shouldn’t be underestimated next year.

Qualified with ease, only to be defeated by Guinea in their final qualifier earlier this month.

They will be solid operators, but can the likes of Moussa Djenepo, Moussa Marega and Sekou Koita help them improve on recent performances at the Afcon?

One of the most high-profile absentees at the last Nations Cup, Burkina Faso avoided Zambia’s ‘feat’ of missing out twice in a row and progressed as Group B winners.

Conceded just twice during the qualifying campaign, and recent additions of the likes of Bryan Dabo and Lacina Traore enhance a strong team spearheaded by Bertrand Traore of Aston Villa.

Finalists as recently as 2015, but they’ve been on the decline ever since, and are still trying to find their identity under CK Akonnor.

Qualifying as hosts, Cameroon have much work to do if they’re to do themselves justice on home soil.

Their recent 2-1 defeat by Cape Verde in Praia only served to highlight the immense work coach Toni Conceicao has to do to if the Central African giants aren’t going to fall flat.

Underachievers since winning the title in 2015, the Elephants were defeated by Ethiopia earlier in the qualifying campaign, but won their last four games to qualify in style.

Offensively, they have the quality to blow teams away, while the likes of Serge Aurier, Eric Bailly and Willy Boly are among Africa’s most accomplished defenders.

Didn’t break a sweat during qualification, and really turned it on against North African rivals Libya, scoring nine across two games.

In the likes of Wahbi Khazri and Youssef Msakni, they have chiselled veterans who will be desperate to potentially end their international careers with African gold.

Desperate to impress after crashing out ignominiously on home soil, Egypt overcame a slow start to qualification to top Group G with 12 points.

They were particularly brutal in their 4-0 evisceration of the Comoros in their final group game, and in Mohamed Salah, they have a genuine game-changer.

Still not entirely convincing under Gernot Rohr, but the Super Eagles could be contenders to better their third-placed finish in 2019.

They are experienced, have options across the park, and some quality goalscoring options.

The reigning champions have elite offensive options—the kind of quality that can outgun any of their rivals—and they boast strength in depth.

The experience of winning in 2019 will serve them well, but will too many key elements of the side be over the hill come next year?

Still not convincing everyone, but Morocco have an awesome collection of talents, with defensive solidity, options in attack and the creative genius of Hakim Ziyech and Adel Taarabt.

Currently ranked 20th in the world, Senegal will be gunning for their first title in Cameroon and—inspired by Sadio Mane