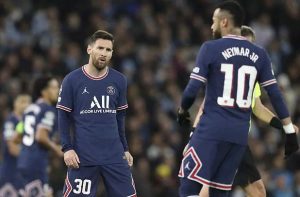 They didn’t stop there and the stars came in all over the pitch over the summer, but PSG need more than great names to be a great team.

They couldn’t avoid defeat away to Manchester City on Wednesday, meaning they’ll progress in second behind Pep Guardiola’s side.

They cannot defend properly as their front three don’t press as much as they need to. Neymar’s work rate has improved, but it’s not enough.

Rodri’s performance was so good it should be shown to all young players.

He dominated from the first to last whistle and he completely controlled the game. Everything went through his feet.

Gabriel Jesus made a difference to City, transforming them from a passive and ineffective side into a lethal, ambitious machine.

He scored the winner, but his impact was felt beyond that. Having a No.9 allowed City to play differently and it worked.

Is Mauricio Pochettino’s plan the right one for PSG?

He played with three defensive midfielders knowing he has to compensate for the lack of work rate in attack, but they are not a cohesive side yet.