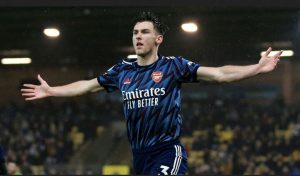 Kieran Tierney has tempered Arsenal’s expectations for the remainder of the season following their recent run of form, admitting that they still have plenty of work to do in order to secure a top-four finish.

The Gunners last played Champions League football in the 2016/17 season – Arsene Wenger‘s penultimate campaign in charge of the club.

They spent the next four years in the Europa League before an eighth-placed Premier League finish last term meant they missed out on European football altogether this year.

Mikel Arteta’s side are finally beginning to show some promise after two years with the Spaniard at the helm, currently sitting fourth in the table and six points clear of rivals Tottenham – though Spurs have three games in hand.

Tierney spoke to the media following Arsenal‘s impressive 5-0 win at Norwich on Boxing Day, insisting there is still plenty of work ahead for he and his teammates.

“It’s obviously what every Arsenal fan, player and staff wants, but there is a long way to go.”

“We can’t get too ahead of ourselves yet.

There are big games coming up and there are a lot of games coming, so there’s still a long way to go.

“We have got a very young team and it’s brilliant to see.

Hopefully for years to come we are all playing together and growing together.

I think you can see that over the last year or so.”

Arsenal were scheduled to face Wolves on Tuesday 28 December, but the visitors were successful in their request to have the match postponed due to a Covid-19 outbreak and injury concerns.

That means Arteta‘s men will get an extra rest ahead of their mammoth clash at home to Manchester City on New Year’s Day.