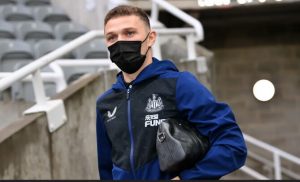 Newcastle new signing Kieran Trippier has revealed his desire to move back to the north of England, and not the riches.

The England international has signed a two-and-a-half-year contract worth £100,000 a week with the Magpies,

having spent a few years in Spain with Atletico Madrid, where he won a La Liga title.

and he joins a side currently scrapping to save their Premier League status, sitting 19th in the table with just one victory all season.

“There was some other interest but I made it clear I wanted to come back up north.”

“If people say it’s about money, everybody’s entitled to their opinion,

but the players I’ve played with and managers I’ve worked under, they know the type of character I am.

“I’ll fight for the shirt and I’ll relish the challenge.

I’ve got my reasons for coming here, I know the reasons why and money’s not one of them.”

The move brings Trippier back to the Premier League, where he previously played for Burnley and Tottenham.

Trippier says he does not believe the move from the heights of Spain’s top flight to the depths of England’s will harm his international chances.

“Every opportunity to represent my country is an honour.

Just because I’ve moved to Newcastle, nothing has changed.

Gareth [Southgate] and I will be in contact soon. I’m not giving up hope of England.

“I want to put on good performances for my club and show him I’m still playing at the highest level.

I’m still ambitious, I still want to get into the England team. I know I’m up against some good full backs in the shape of Reece James, Kyle Walker and Trent Alexander-Arnold,

but I’m still in very good shape and if I can play well for Newcastle then who knows on the international front?”

Trippier made his Magpies debut in their FA Cup clash with Cambridge on Saturday afternoon.