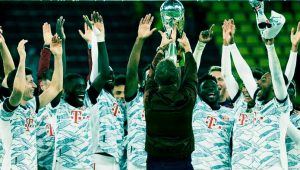 as he acknowledged his side earned its place in the final because of last season’s performances under predecessor Hansi Flick.

The victory and accompanying trophy were much-needed for the club after losing three of four pre-season friendlies,

and drawing with Borussia Monchengladbach this past weekend.

But for Nagelsmann, the pressure to maintain high standards in his new role,

will not have dissipated with the result, with the Bavarian boss saying he doesn’t have much time to celebrate.

“We don’t have much time to celebrate,” Nagelsmann told reporters. “The title is a reward for last season as Hansi Flick won the league with this team.

“I’m happy, but the title belongs more to other people than me.

“We defended very well, we were aggressive. We won the ball high up the pitch. Niki (Sule) and Upa (Upamecano) were very stable at the back. It was a step forward for both of them.”

For those who have been in competitive action for Bayern for more than a couple of weeks, the victory was heralded as an important accomplishment.

“The title means a lot to me,” Robert Lewandowski . “It was a good game for the fans with a lot of attacking actions. We can play even better than today, we are still at the beginning of the season. We need a bit more time.

“We’ll enjoy this title and the look ahead. I really missed playing in front of fans. It was emotional and it’s always something special.”

Added Leon Goretzka: “The atmosphere was great, I really enjoyed playing in front of fans again. Dortmund showed they’re a great team. We wanted to show our quality in this prestigious game and we did it well. In the end we deserved to win.”

The squad will take on Koln on Sunday in the Bundesliga.