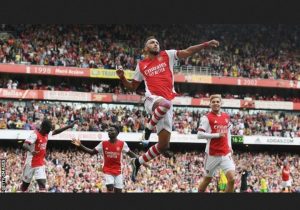 The Arsenal coach was under mounting scrutiny after a miserable start to the campaign,

with three defeats that left the Gunners at the foot of the table,

so a win that was workmanlike rather than spectacular will be gratefully received.

The Garbon striker was back on target to set Arsenal on their way after 66 minutes,

with a finish from almost on the goal-line after Canaries’ keeper Tim Krul turned,

Nicolas Pepe’s shot on to the post and the same player then struck the woodwork again.

Arsenal had an anxious moment as referee Michael Oliver conducted a VAR check,

for offside before the Emirates Stadium celebrate with a mixture of elation and relief.

Arteta used his programme notes to call for patience after his side’s poor start to the season,

but he will know as well as anyone that the clock ticks on any manager who struggles to get,

points on the board, especially at a club with high aspirations.

“We are trying to build a medium- to long-term project, which also needs immediate results.

That only happens in elite sport and most importantly in football.”

The Gunners had a difficult opening set of fixtures but Arteta knew this was a must-win to stop the pressure mounting even more.

He will also know this is just a start but he will accept it with both hands and move on,

to the potentially hazardous visit to Burnley to try and consolidate on these three points.