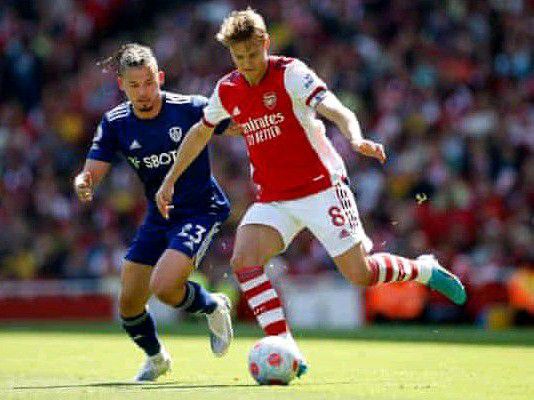 Arsenal took a huge step towards securing Champions League football next season as they saw off an ill-disciplined Leeds United, with the 10-man visitors dropping into the Premier League relegation zone.

the driving seat for a top-four spot before Thursday’s north London derby at Tottenham.

But Leeds’ early capitulation was entirely of their own making, with goalkeeper Illan Meslier

gifting the hosts an opener before captain Luke Ayling was sent off for a needless lunge on Gabriel Martinelli.

move to double the Gunners’ lead before Ayling’s rash challenge left Leeds a man down for more than an hour.

in the 66th minute to tee up more of a nervy finish than anyone inside Emirates Stadium would have anticipated.

But the fourth-placed hosts were never seriously in danger of losing their lead and now hold a four-point lead over Tottenham in fifth.

Defeat for Leeds, coupled with Everton’s win at Leicester, means Jesse Marsch’s side slip into the bottom three with three games remaining.