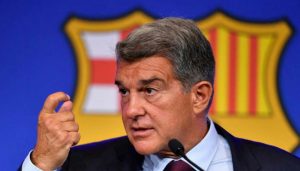 Laporta was elected president at Camp Nou for a second term in March,

replacing Bartomeu following his resignation at the end of the 2019-20 season.

Bartomeu left Barca in financial disarray as they ended up posting record debts in excess of €1 billion (£849m/$1.18bn).

At the start of the year, and Laporta has now revealed the full extent of the mess he has been trying to clean up.

Laporta has issued a response to a letter sent by Bartomeu last week accusing him of failing to act quickly enough to address the club’s sliding accounts at a crucial point during the coronavirus pandemic.

“When we took over the club we asked for a bridge loan of €80m (£68m/$94m) granted by Goldman Sachs because we would not have been able to pay the salaries of players and employees,” he said at a press conference on Monday. “The previous board had received an advance of €79m (£67m/$93m) relating to 50 per cent of La Liga’s television rights and the banks charged it at 9% interest.

“The reduction of wages by the previous board was not real. We have found those millions in different types of bonuses and variables included in the new contracts. We have found disproportionate payments to intermediaries, not agents, a transfer that cost €40m (£34m/$47m) and for a purchase premium we paid €8m and a sale premium of €2m. A person was paid €8m to find players in South America.

“The entity’s controls were bypassed. Invoices were divided up, such as those of ‘I3 Ventures’ with ‘Barcagate’, invoices of ‘Espai Barca’ and of the debt contracted were also divided so as not to go through the Assembly.

“Bartomeu’s letter is full of lies. It obeys an effort to justify management that is unjustifiable.

It is an exercise in despair. We have a salary bill that represents 103% of the club’s total income. It represents 20-25% more than our competitors.

Laporta insists that the blame lies firmly at Bartomeu’s door, however, with the club’s current struggles to reduce their wage bill deemed to have started when the €222 million (£188m/$261m) deal was struck with PSG.

“He talks about Neymar,” he added. “He says that we have forgone €16.7m. Another lie, it is not true. And you could remind Bartomeu of the damage that the Neymar case did to the image of Barca. Because it was an infinity of lies.

“When he sold Neymar for 222 million, they had already spent disproportionately. This triggered wages and amortisation.”