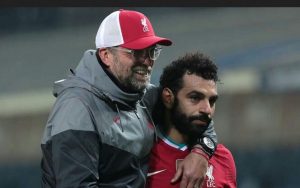 The Liverpool winger put up an incredible display as the Reds blew aside the Norwich in Saturday’s session opener.

Liverpool head coach Klopp has full of praise on forward Mohamed Salah, calling the Egypt international a “proper competitive boy” in the wake of his incredible display against Norwich City.

After setting up Diogo Jota and Roberto Firmino, the African opened his account of the 2021-22 campaign as the Reds picked a 3-0 away win over Daniel Farke’s men at Carrow Road.

READ ALSO: Guardiola Responds To Klopp’s Criticism Of Man City Transfers. -‘If They Don’t Agree, They Can Go To Court’

His 74th-minute finish was a fine left-footed shot from the top of the box that took a slight deflection, leaving Tim Krul helpless.

The 29-year-old has now scored in five consecutive Premier League openers, becoming the first player to hit that mark.

“I would assume he knew about that and wanted to score it! Extra motivation! A really good game,”

When you know about that and you set up the first two goals, which is really cool, and after he scored he tried to find Sadio [Mane] twice with a pass, so that was really, really good.

“But Mo is Mo and when the competition starts, he goes into the next gear because he’s a proper competitive boy. It’s good to have him!”

In addition, Salah now has 10 total goal involvements in games on the opening weekend of the Premier League in his career, with seven goals and three assists.

Only former Manchester United star Wayne Rooney, who has eight goals and five assists in Premier League openers, has more.

AlSO READ: Van Dijk Extends His Contract At Liverpool Till 2025

The two-time African Player of the Year would be hoping to continue his fine form when Liverpool welcome Burnley to Anfield in their next game on August 21.

Following his fine outing in the 2020-21 campaign, the Egyptian was named the Premier League PFA Fans’ Player of the Year.

He scored 22 league goals and set up five others but they were not enough to help the Reds win the league title after finishing third behind Manchester United and champions Manchester City.

No doubt, much is expected from Mohammed Salah this session, if he stays out of injuries .