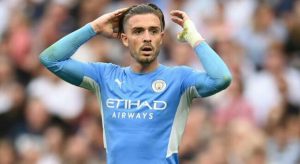 The Man City coach claim that the most expensive player in English football history will be “so useful” for his side as the season progresses.

Guardiola was very pleased with Grealish’s all-round display against Tottenham,and has no doubt he will go on to make a huge contribution to his team as the 2021-22 campaign progresses.

Grealish made his Premier League bow for City at Tottenham Hotspur Stadium on Sunday, having been lured away from Aston Villa for a British record fee earlier this summer. The 25-year-old played the full 90 minutes against Spurs, but was ultimately powerless to prevent the Manchester outfit from slumping to an opening weekend loss for the first time in 10 years.

READ ALSO: Guardiola Responds To Klopp’s Criticism Of Man City Transfers. -‘If They Don’t Agree, They Can Go To Court’

Pressed on what impressed him most about the ex-Villa star’s performance, the City head coach told reporters post-match: “His personality and influence. He got three or four fouls in the first minutes and immediately he woke up and showed himself.

“He has incredible continuity, he is so dangerous close to the box, when we have the ball he always has an extra pass.

“There was three or four fouls in the first minutes and immediately he woke up and showed. He has incredible continuity, he is so dangerous close to the box, when we have the ball he always has an extra pass.  He had an incredible game and incredible debut and will be so important for us. I congratulate him for having the personality to try and try until the end.”

Grealish will be back in contention for a place in Guardiola’s line-up when City welcome newly-promoted Norwich to Etihad Stadium on August 21.

Pep sides  will then look forward to a meeting with Gunars seven days later before the first international break of the season.