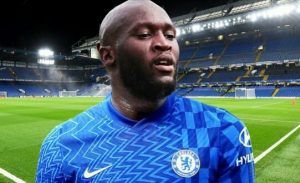 The Begian striker  train with his Chelsea team-mates for the first time on Tuesday after a quarantine period following his club-record £97.5m move from Inter Milan.

Lukaku is expected to be involved for Chelsea against Arsenal on Sunday, SkySports reports.

He returned to Chelsea this week, 10 years after he first signed for the club as a teenager from Anderlecht.

The striker struggled to make an impression during his first spell – failing to score in 15 appearances – and moved to Everton in 2014 before joining Inter, via Manchester United.

But after two outstanding years at Inter, scoring 24 goals in Serie A last season to help them to their first Italian title in 11 years, Lukaku said returning to Chelsea was the “chance of a lifetime”.

He had previously said he would remain at San Siro for the 2021/22 campaign but changed his mind and asked Inter to arrange to sell him to Chelsea after it became clear the club wanted to make his return a reality.

He completed a medical on Sunday ahead of a £34m move.

Talks progressed positively after Roma general manager Tiago Pinto met the striker in London on Thursday, and the Serie A side believe he will be a key part of boss Mourinho’s plans.

Abraham is expected to sign a five-year contract worth £4m a year after tax.

Chelsea will have €80m buyback option on the 23-year-old, which can be triggered in the summer of 2023.