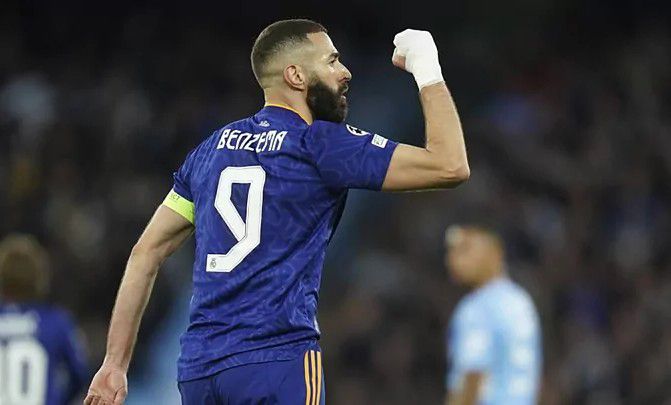 Karim Benzema continues to make history with Real Madrid. Against Manchester City, he equalled Paco Gento in the number of games in a Real Madrid shirt.

With 600 appearances, Benzema drew level with another Los Blancos legend, and he capped the occasion with two goals.

His strikes at the Etihad Stadium took his tally to 41 goals in 41 games this season.

But he is also having his best season in the Champions League.

With this brace he has now scored 14 goals in this season’s competition, surpassing Bayern Munich’s Robert Lewandowski.

Unlike the Polish forward, Benzema can still add to his tally.

Karim will, as a result, be crowned the Champions League’s top scorer for the first time in his career.

Aiming for the Pichichi in the Champions League too.

Benzema is undoubtedly the most decisive player in the Champions League this season,

which makes him the favourite to win the Ballon d’Or, which will be awarded in June.

The proof of this is that of his 14 goals, and nine of those have come in the knockout stages,

an incredible figure, in addition to the five in the group stage.

Benzema score three goals against Paris Saint-Germain to win the tie, another three against Chelsea in the first leg,

plus the decisive strike in the second leg, and another two on Tuesday against Manchester City.

With these 41 goals, Benzema becomes the fifth player to reach this figure in a single season in Real Madrid’s history,

In the 21st century, he is the second player from the club to do so after the Portuguese.

He also closes the gap on Raul as the second-highest goalscorer in the club’s history, with 320 goals to the former captain’s 323.