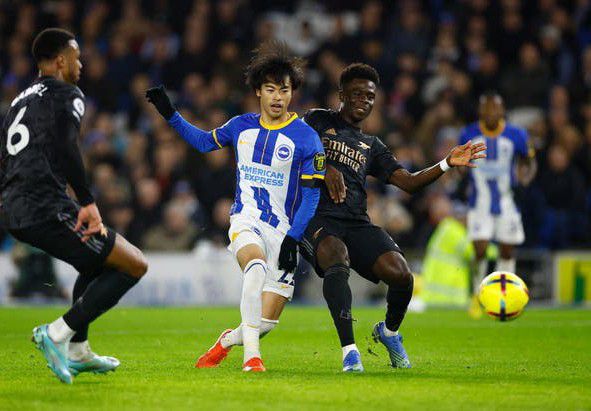 The Gunners took barely a minute to take the lead when Gabriel Martinelli‘s deflected shot fell into the path of Saka who provided his customary precise first touch and cool finish.

This advantage was doubled, a little fortuitously when, after a corner was half-cleared, Martin Odegaard’s shot into the ground bounced into the top corner.

The lead was three early in the second half when Martinelli shot from a tight angle was parried by Robert Sanchez into the path of Eddie Nketiah who made no mistake from close range.

Brighton pulled a goal back from a smart finish from Kaoru Mitoma but a wonderful forty-yard through-ball from Odegaard put through Martinelli to extend the lead.

The hosts kept battling though and pulled a goal back from Evan Ferguson‘s first goal for the club and had another from Mitoma disallowed.