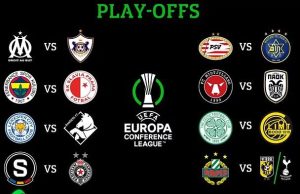 The UEFA Conference League enters its first-ever knockout phase, with eight games to be played.

The eight group leaders were LASK Linz, Gent, Roma, AZ Alkmaar, Feyenoord, Copenhagen, Rennes and Basel, so they will not take part in the playoffs.

The draw has no Spanish team and leaves no real standout ties.

One question remains to be resolved: what will happen to Tottenham Hotspur?

Spurs did not play their last game against Rennes due to a COVID-19 outbreak and, as it stands, they will be eliminated.

The Conference League playoff round ties