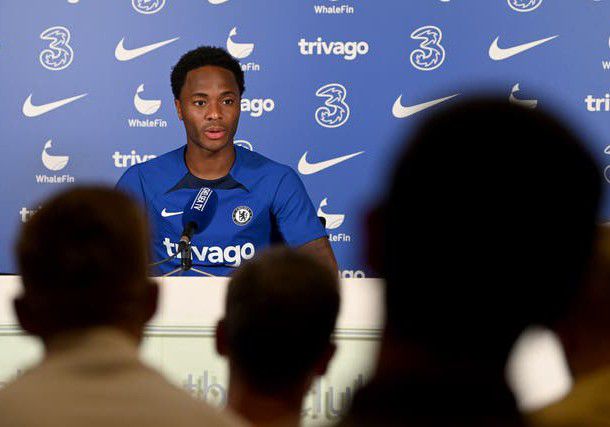 Raheem Sterling reveals he did not want to “waste time” at Manchester City and says his move to Chelsea was down to getting more game time at the “peak” of his career.

The 27-year-old swapped City for Chelsea this summer, moving to Stamford Bridge in a £47.5m transfer.

Sterling says returning to London – where he moved to from Jamaica aged five – feels like “coming home”, while he puts the move down to the desire for a “fresh challenge” as well as the belief he will play more at Chelsea.

Read Also: Romelu Lukaku: ‘I Have An Anger Inside Of Me – Everyone Forgot What I Am Capable Of At Chelsea’

“The move came about, like anything as a person you strive to achieve, and I just felt my time at City was getting limited on playing time for different reasons.”

“I couldn’t afford to waste that time. So I needed to keep that same level and a fresh challenge.

It’s something that since 17 I’d been a regular starter, so to get to a peak time in my career,

not to play regularly is something I wouldn’t accept.

“My personality is to try to fight and change the scenario, but it didn’t happen and that’s it.

This was the option that was tailor-made to my personal goals, and with my family as well, and the direction the club is going in.

“It’s a team that’s competing and only going to get better.

With the new ownership as well, it made a lot of sense. It was tough, of course, with the time I spent at City and there’s lots of memories and top moments.

“But the year and a bit that I was in and out of the team taught me a lot about myself, made me value a lot of things and I tried to get things in order.

It was a difficult decision but you have to make the decision that’s best for yourself.

“It does feel like coming home, coming back to London; it’s been a long time that I’ve been away, since about 14 or 15.”

Sterling was asked about the racist abuse he received from Chelsea fans while playing for City at Stamford Bridge back in 2019.

One fan was handed a life ban, with five more temporarily banned from football matches, but in response to the question Sterling said:

“That’s the first time I’ve actually even remembered it.

“It wasn’t anything that played on my mind at all, I can’t let abuse from individuals affect my perception of a club.”