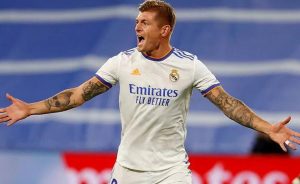 Newcastle United fans are counting down the days until the January transfer window opens, and with it will come the first opportunity for the Saudi Public.

Avoiding relegation is the priority for the 2021/22 season.

Following the appointment of Eddie Howe as coach, the club’s hierarchy plan to back him in the January window, with there already five targets identified.

The German midfielder would be the most difficult signing of the list for Newcastle United, although they plan to investigate the possibility of securing his signature anyway.

The former Bayern Munich star has two years left on his contract with Real Madrid and has made clear his intention to retire with Los Blancos, but there is a chance Newcastle could offer Florentino Perez a transfer fee that he can’t say no to.

Defensive concerns will see the Magpies look towards the Bayern Munich centre-half, which will be another move that will take some work.

However, it won’t be as problematic as signing Kroos, despite the fact the defender is getting regular minutes with the Bavarian club.

A significant economic offer could tempt Bayern Munich to sell, especially with the promising Tanguy Nianzou, coming through the ranks at the club.

Ole Gunnar Solskjaer doesn’t trust the Dutch midfielder and he has only given him 150 minutes thus far this season.

The midfielder cost Manchester United around 40 million euros, but has instructed his agent to work on a possible exit in the winter market.

Few clubs would get near the fee that United paid Ajax for the player, but the Reds may hope to take advantage of Newcastle’s newfound wealth.

Despite Solskjaer’s insistence that Lingard was hugely important during the summer, when he was a sellable asset, the English playmaker has notched up just 160 minutes, 10 more than Van de Beek.

His desire to play at the 2022 World Cup in Qatar could accelerate a cut-price move in January, although with his contract due to expire in June, Newcastle would be wise not to offer too much.

Howe worked with the defender at Bournemouth, although he didn’t give him many minutes at the time, but his development at Aston Villa has been exceptional.

He has gained Premier League experience and is a defensive leader, and would bring a huge amount of strength to the Magpies’ ailing defensive line.