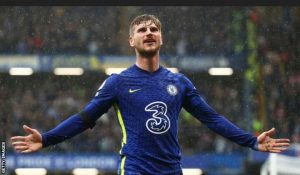 Timo Werner and Ben Chilwell struck in the final six minutes after Saints had been reduced to 10 men following the dismissal of captain James Ward-Prowse for a poor challenge on Jorginho.

Swooping at the back post to head in his second of the season after Ruben Loftus-Cheek flicked on Chilwell’s corner.

A dominant Chelsea had the ball in the net on two further occasions in the first half.

However Romelu Lukaku was flagged offside and Werner’s header was ruled out.

Following a foul by Cesar Azpilicueta on Kyle Walker-Peters in the build-up.

The hosts were punished for not extending their advantage when former Chelsea player,

Tino Livramento was tripped by Chilwell in the box and Ward-Prowse fired in the resulting penalty.

However, the visitors could not hold out for a point following the loss of their skipper,

whose yellow card was upgraded to a straight red after referee Martin Atkinson viewed the pitchside monitor.

And having lost 1-0 to Juventus in the Champions League in midweek after their unbeaten league start was ended by Manchester City.