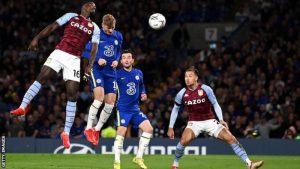 A goal from young Villa forward Cameron Archer had ensured a draw in normal time.

Levelling with a header after Timo Werner had put the Blues ahead.

Werner’s goal was his first in 11 games for Chelsea and he should have had a second but dragged a shot wide.

Reece James scored the winning penalty in a shootout

The result extends the reigning European champions’ unbeaten start to the season,

which has also seen them top the Premier League with 13 points from five matches.