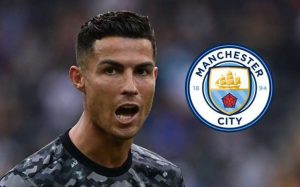 The five-time Ballon d’Or winner has been  only option for Pep Guardiola to strengthen his attacker,

since Harry has decided to stay at Spur.

linking him with a transfer to Manchester City continue to intensify.

The Portuguese is set to say his final goodbyes to the Juve squad,

as his agent Jorge Mendes continues to work on a permanent move for the five-time Ballon d’Or winner before the August 31 deadline.

Juve are now just waiting for City to submit a formal bid for Ronaldo,

who is eager to embark on the next stage of his career away from Turin.

having accepted that he will not be extending his stay at the club beyond the expiration of his current deal in 2022.

Mendes is in the process of negotiating the terms of Ronaldo’s departure, with City now,

the only club in the running for his signature after Paris Saint-Germain president Nasser Al-Khelaifi ruled out a swoop on Thursday.

Juventus are in contact with Everton for Moise Kean, he’s one of the names in the list.