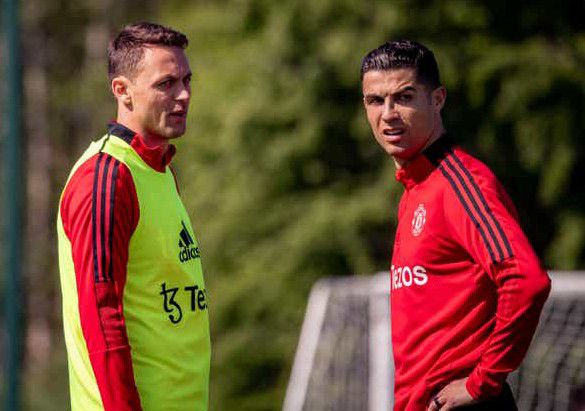 Cristiano Ronaldo is available to return for Manchester United against Arsenal on Saturday.

The Portuguese star  missed the 4-0 defeat at Liverpool on Saturday after being granted compassionate leave following the death of his new-born son.

Ralf Rangnick has confirmed he is available again for the must-win game at Emirates Stadium.

Raphael Varane and Scott McTominay have also returned to training this week but Edinson Cavani and Luke Shaw remain injured.

“Scott McTominay will be back and fit to play,” said Rangnick on Friday.

“He has been training with us and will train today, so he will be available for the game tomorrow.

The same is true with Rapha Varane and, obviously, Cristiano is available again.”

the midfielder is unlikely to play again this season because of the calf injury he suffered at Anfield.

“With Paul, it seems, after the scan we did yesterday or the day before yesterday,

it’s very unlikely that he will play until the end of the season again,” said Rangnick.

“The doctor told me that it will take four weeks, minimum, for him to recover and,

since the last game is at the end of May, I don’t think it’s very likely that he will be able to play again.”

Such was the manner of the defeat, Ralf Rangnick will surely make changes to the side who were thrashed 4-0 by their biggest rivals.

Marcus Rashford was heavily criticised for his display while young Hannibal Mejbri made an impact when he was brought on even despite the game being over upon his introduction.