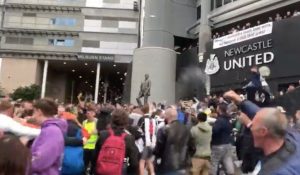 Newcastle fans were partying in the streets surrounding St James’ Park as the Mike Ashley era was officially over.

The £300million takeover by the Saudi Public Investment Fund.

Which has a combined worth of £320billion, was confirmed on Thursday afternoon.

Supporters started gathering outside the stadium as the takeover edged closer and the party atmosphere was in full swing.

Fans were swigging from cans and setting off flares in anticipation that the news would be officially confirmed.

They were rewarded as statements were released just after 5pm announcing that Ashley was gone after 14 years.

A huge roar went up from the amassed supporters as chants of ‘we’ve got our club back’ rang around the streets.

“Oh. My. Days! Can you believe it? It is absolutely bonkers.

“Relax, breathe and just remember when Mbappe turns up, Joelinton has still got the shirt and he’ll be back up to Joelinton.”

“What I did want to say is I think it is the perfect opportunity to bring Jose Mourinho back.

“If there is one thing that guy knows how to do it is to build a winning side when he’s given a blank cheque.

“If you remember when he was at Spurs and they used to go back to Newcastle.

He always said he loved the fans and the stadium and had the old relationship with Bobby Robson.”

Things moved swiftly to confirm the takeover of Newcastle as even earlier this week it looked like it was dead in the water.

The Premier League said it had settled legal disputes that had initially stalled the takeover process.

And received “legally binding assurances” that the Saudi Arabian government will not effectively own the club.